The Langlais Lab is all about insulin signaling, more specifically, discovering the underlying mechanisms governing insulin-stimulated glucose uptake. Through a series of protein signal transduction pathways, insulin stimulates the translocation of the insulin-sensitive glucose transporter GLUT4 to the cell surface, resulting in a massive influx of glucose into target cells in both muscle and adipose tissue. The net result is the lowering of blood glucose levels back to normal, a process that if interfered with (termed “insulin resistance), can be a contributing factor to the pathogenesis of type 2 diabetes. So we attack this problem with the mantra that you can’t fix it until you know how it works. 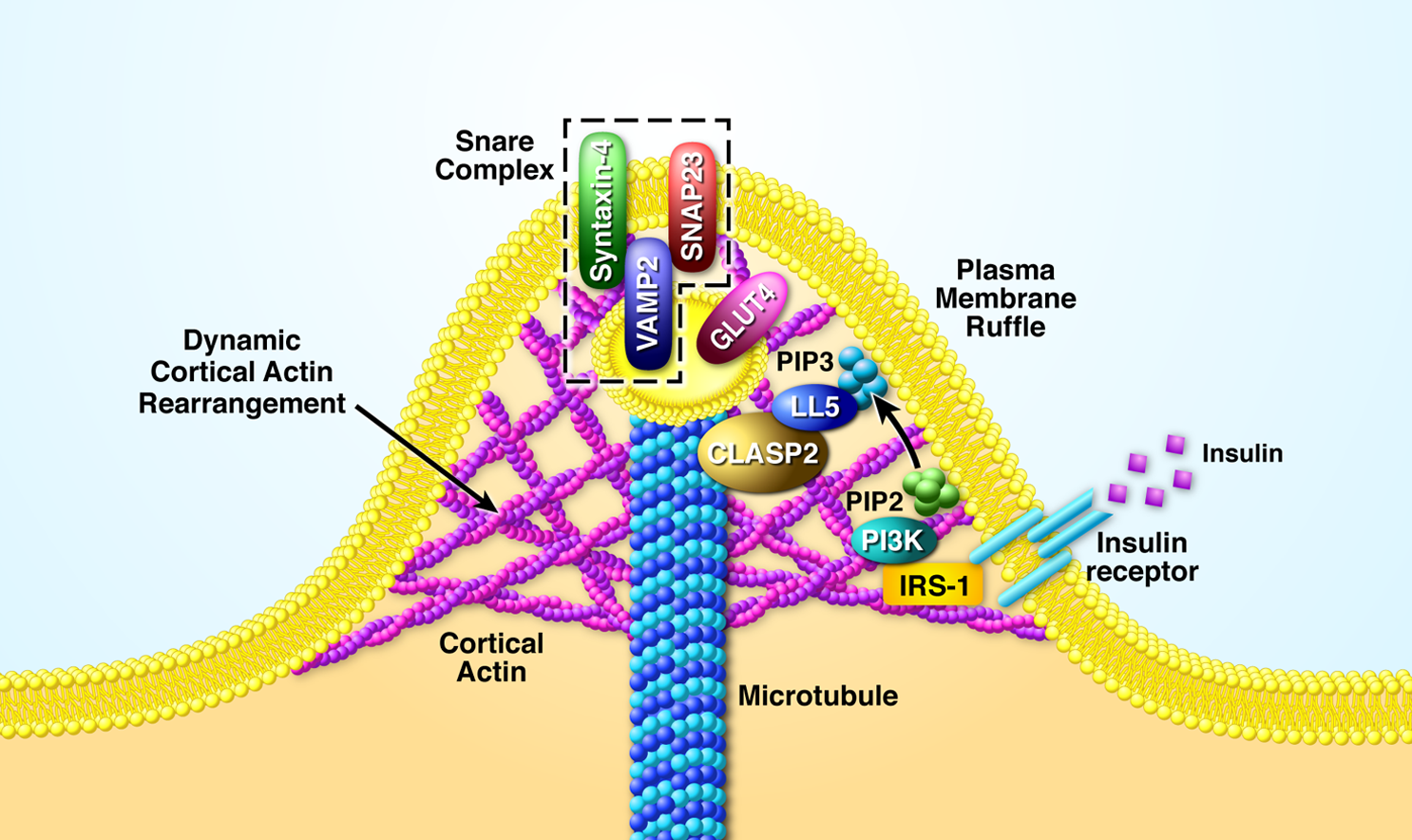 In 2011, by taking advantage of affinity purification mass spectrometry (AP-MS), Dr. Langlais, as a post-doctoral fellow in Dr. Mandarino’s lab, discovered that insulin stimulates the phosphorylation of the microtubule associated protein, CLASP2, a finding that eventually tied CLASP2 to insulin-regulated trafficking of GLUT4 and glucose uptake. Since CLASP2 tracks along the growing plus-end of the microtubule, a hypothesis evolved that proposes CLASP2 directs growing microtubules to hotspot landing zones on the plasma membrane, whereby setting up accessible GLUT4 for acute translocation and plasma membrane fusion (Langlais et al, JBC, 2012). The Langlais Lab has been in hot pursuit of this notion ever since. 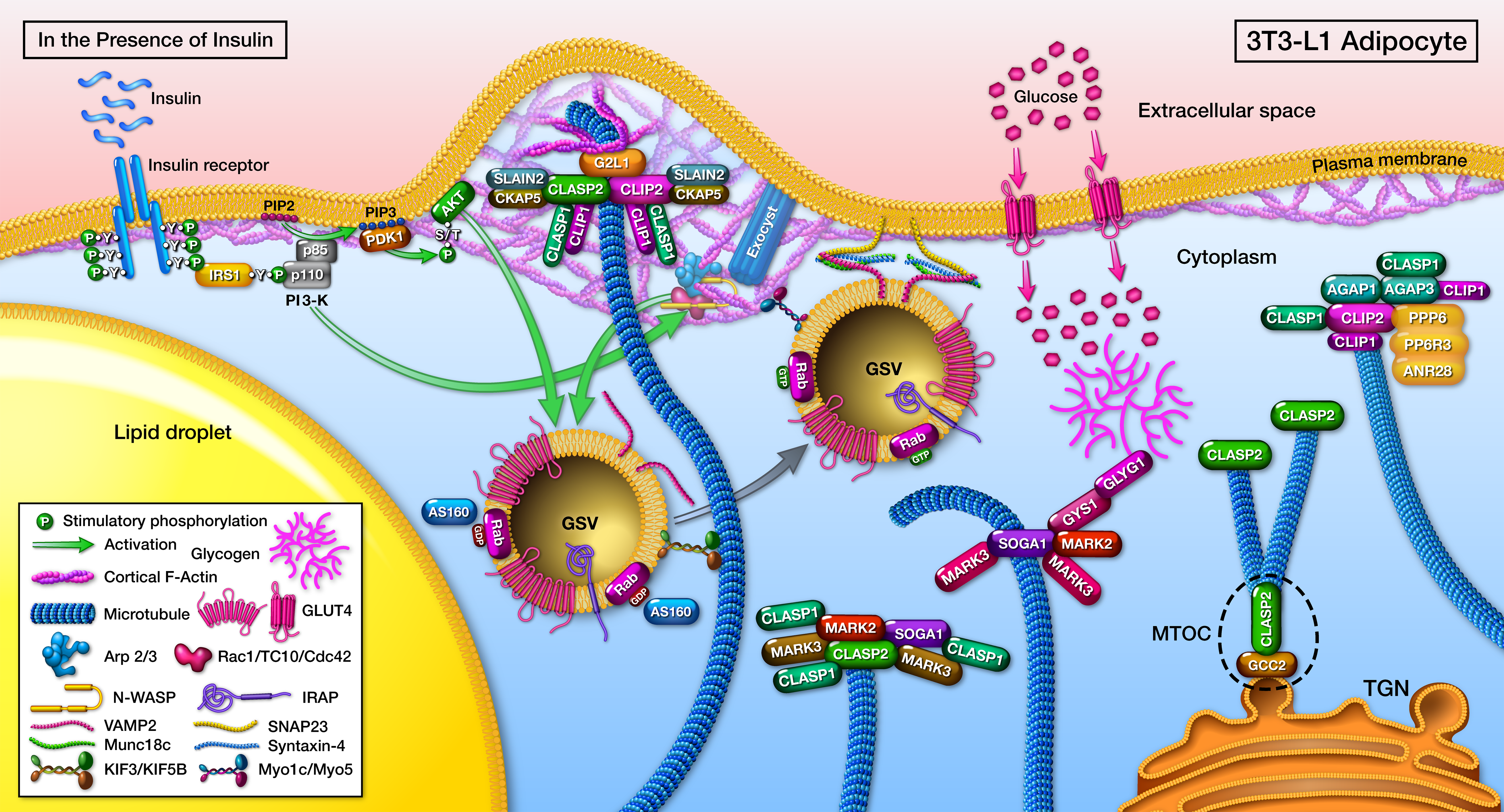 The first big move on the CLASP2 project started as “just characterizing the CLASP2 interactome”, which turned into a 5+ year gauntlet. Turns out, pulling off an actual conclusive interactome is difficult, but even worse, is trying to avoid false positives. Once those hurdles were overcome, a chain of reciprocal interactome experiments led to the establishment of a CLASP2 protein network in adipocytes, and also niftily managed to identify a new microtubule-associated protein, SOGA1 (Kruse et al, MCP, 2017).

Next up we set out to test the hypothesis that insulin affects CLASP2 dynamics in a live-cell setting. For this, we collaborated with the Mouneimne Lab and Sara Parker, a Post-Doctoral Fellow, who ended up joining in on the obsession. We were able to link CLASP2 together with G2L1, a plus-end binding protein that associates with both microtubules and actin, and we discovered that insulin causes both proteins to spatially reorient themselves along microtubules. The microtubules looked braced with all that CLASP2 and G2L1 after insulin stimulation, an observation that once we followed up on, led to the discovery that insulin causes microtubules to stabilize, a finding we brought Nam Lee's Lab in to help out with. 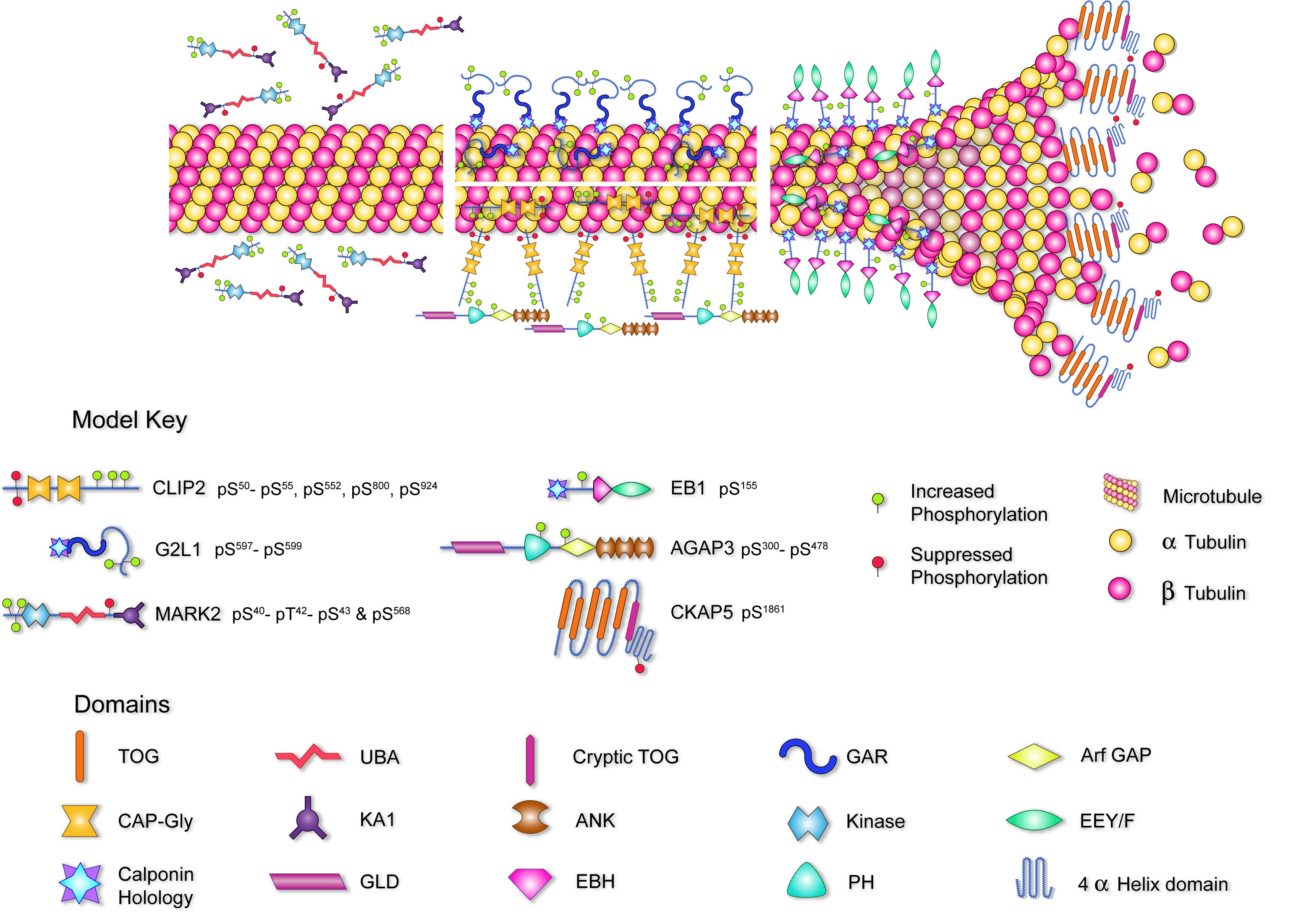 The cherry on top of this scientific smorgasbord though was another hypothesis we had that hit pay dirt. We did not think CLASP2 was the only microtubule associated protein that responds to insulin stimulation, so using a novel label-free mass spectrometry-based method for quantifying directional changes in protein phosphorylation that we came up with, we discovered that the CLASP2 protein network members MARK2, CLIP2, G2L1, AGAP3, CKAP5, and the closely associated EB1, all undergo insulin-regulated phosphorylation. We now believe that it is not just CLASP2, but rather, a network of microtubule-associated proteins that synergize to coordinate insulin-regulated microtubule dynamics. All this ended up being wrapped up together in our latest publication (Parker at al, 2019, MCP). 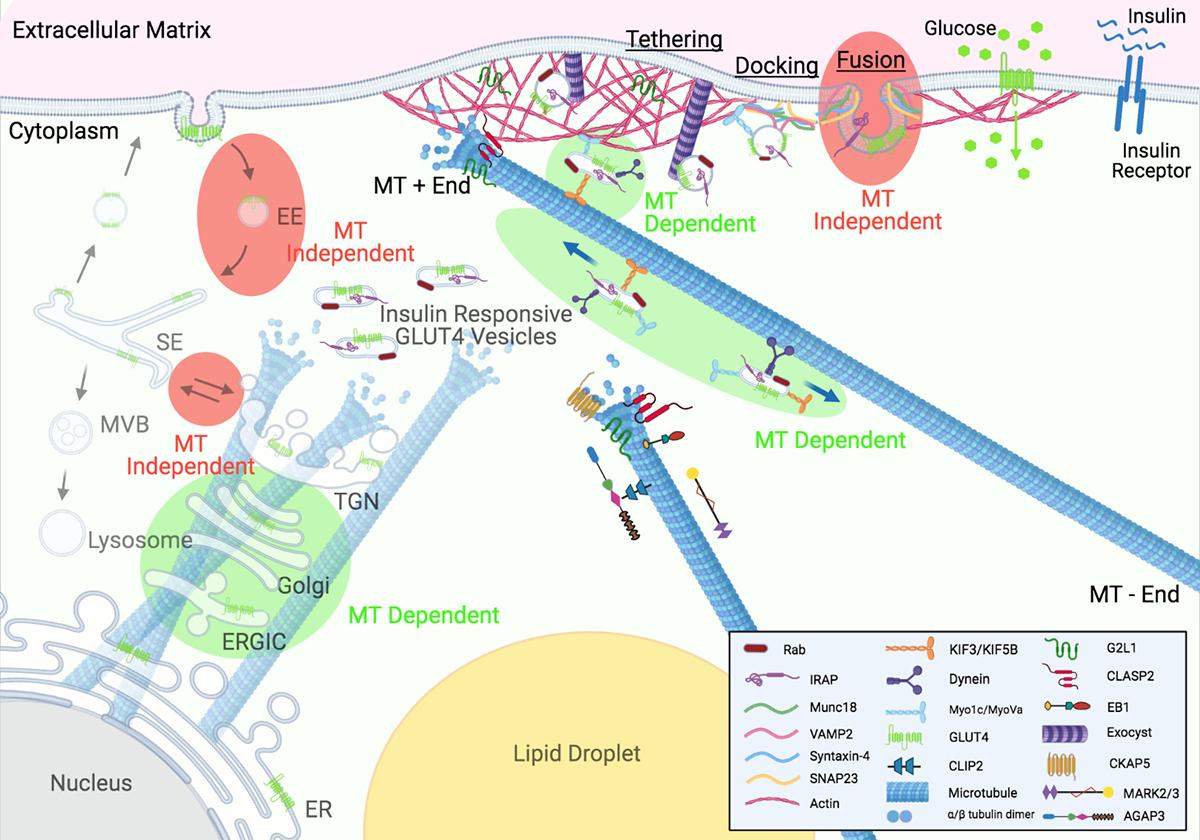 After working on these microtubule-associated proteins for long enough I had about 26 failed grant proposals, so, I came to the conclusion that what this world needs is another review! Even though microtubules have been in and out of vogue in the field of insulin action for decades (although they are definitely not currently in vogue as I think we're the only lab in the universe who works on them), there has never been a review on this topic. I reached critical mass in 2020, roped in Skylar the undergrad post-doc, and off we went into the abyss and right away realized we were screwed. Unfortunately, the literature is all over the place in regards to findings on microtubules in insulin action, although, after staring between thousands of lines of text, patterns began to emerge. We contacted Trends in Endocrinology & Metabolism and the editor Matthew Beymer was all in immediately. So, over the next 18 months, we wrote it, went through peer review, obtained excellent feedback, and got it out there for all of you to enjoy (Batty and Langlais, 2021, TEM). As with everything we put out, I'm really curious if anyone references this review, you know? How much impact are we really making here?

What’s next right? We are currently wrapping up our project on characterizing insulin-regulated CLASP2 phosphorylation. We are in hot pursuit of G2L1, a sassy protein that connects microtubules and actin, so far, grant success on that is 0 for 2 but, you know how that goes, only 14 more submissions and I still won't have a grant but maybe i'll be retired LET'S GO!